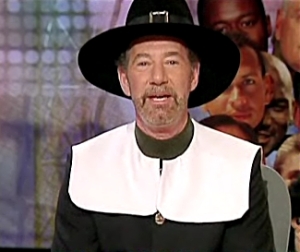 I’m one of the “littles“…( a FAN of the Tony Kornheiser radio show).  I listen to the podcasts of the show religiously when I’m on the road.  It’s funny, smart, snarky and covers topics from sports, politics, movies, culture, food, etc. (frankly whatever “Mr. Tony” wants to talk about).  For WAY more information than you really want to know…check out his wiki page).  I was scrolling back through some of my past blog posts and rediscovered a post from 3 years ago that featured a clip from his show. (Listen to the excerpt here…Tony Kornheiser on Spirituality. It’s a little over 9 minutes long but worth the listen.)

In my original blog post, I said that I wanted a group like the the one Kornheiser describes (beginning at around the 5 minute mark of the clip).  Specifically I said, “…what was so meaningful about [Kornheiser’s golf] outing and what draws most of us toward that kind of experience is the community that allows such a conversation to occur.  I want that.”

Something has evolved for me over the past couple of years that resembles the community evident in Kornheiser’s Yom Kippur golf outing. It is what I “wanted” but looks different than I expected.  A few months after that blog post, I started a conversation with several friends facilitated through a private blog.   It is a group of friends who trust each other implicitly, enjoy spending time together whenever we can, and who are a source of encouragement and challenge that make life better just knowing they are there.  We have a lot of things in common, but we differ on MANY things as well…politics, theology, religion, even continents.  But unlike many institutional forms of “community”, these differences haven’t seemed to hinder the friendships. In fact, the relationships have probably grown deeper through the differences.  More specifically, the growth has occurred through the trust to share those differences out in the open without fear of reprisal.  Which brings me to another observation from Mr. Tony’s radio conversation.

Tony Kornheiser and David Aldridge’s skepticism toward religious institutions is clearly articulated.  Their experiences of and attitudes toward these institutions are shared by many people in society today.  We have all heard those feelings expressed from many of our acquaintances, neighbors and/or co-workers.  This is obviously a problem from the perspective of the institution.  To address the problem, institutions have expended huge amounts of time, energy, and resources.  “Outreach” programs are developed.  Books are written.  Consultants are hired.  Neighborhoods are canvased. Small group programs are initiated.  But we still hear of skepticism directed toward the church based on real or imagined stereotypes of church and religion.  I’ve come to believe we are not going to create the type of community people hunger for by introducing more programs, or slick marketing campaigns.  What to do?

“Start what you need.”  I would suggest starting a conversation among some of your friends…a conversation that is based OUTSIDE the doors of the institutions in question.  A conversation specifically intended to create the community you are looking for.  Don’t force this conversation; allow it to evolve.  However, be intentional.  Take some risks.  Share yourself…the good, the bad, and the ugly. Share the questions and the doubts as well as the definitive portions of your faith.  Chances are, you and some of your friends share that same need.  I have a hunch that the more community we experience in our personal lives, the more community develops in the institutions in which we participate.  It’s a hunch that I’ve experienced personally…both in my friendships and in my church.  A couple of years ago, after hearing something that made me write, “I want that”, I started what I needed.  It’s been more than I thought I wanted.

I met a friend for beers at a local grill last night.  He had endured a rough couple of weeks…the pre-mature and tragic death of a family friend, various faith frustrations.  I’m dealing with my own frustrations at the moment and those were touched on as well in our conversation.  It wasn’t a gripe session, a counseling session, or “ministry” in the sense of a “reportable activity for Mike Young…Ordained Baptist Minister” (billable hours as my attorney friends might put it).  It was simply a couple of friends in conversation about things deeper than college football recruiting classes, steroids in baseball, or Duke/Carolina basketball.  It was not a flash email or text or cell phone call.  It was actual face-to-face friendship.  It was a spontaneous, 2-hour, mutual pause in the busyness of life between two friends.  It was meaningful conversation.  It was “ministry” in the sense that we were followers of Jesus living life together.
Why is this blog worthy?  Maybe it isn’t.  However I follow that question with another:  When was the last time you did that…had a meaningful conversation about real stuff…transparent, open and honest…with a good friend?  Where did it occur?  For you church people…I’m guessing it probably wasn’t at church (An assumption on my part but I feel confident in its accuracy).  Why is that?